Day 27 was to be one that I’d looked forward to for a while having planned it during the dark winter in readiness. I was looking forward to it for two reasons – it was to be my first attempt at Cycling up Box Hill and I was getting to my start point by train, and I do like travelling by train.

So, after a short five mile jaunt from home to the local railway station it was time to jump on an unusually busy train to Shalford, then I remembered it was Farnborough air show week and this train stopped at Farnborough. My early fear about being able to get on the busy train with the bike were allayed when a friendly train guard made people move down the carriage to make room for me, and forty minutes later I was getting off at Shalford.

Plan for the day was to ride from Shalford through to the first point at Shere and then to Box Hill for lunch however this went a little off plan about 200 metres from Shalford station as I cycled past a cafe known as ‘The Snooty Fox’ which I had seen rave reviews for on an internet forum I use so I decided to stop and have a little mid morning snack, which actually turned in to a ‘Full English’.

So with plenty of fuel inside me it was time to start the ride proper – So on leaving Shalford it was time to take the road along the edge of the common, and then up Christmas Hill (which didn’t seem that hilly at all) before turning off the road and heading along the lane through to Chilworth where I started to detect a slight but gradual incline in the road, which was confirmed by the village sign as I entered the village proclaiming “Welcome to Chilworth in the Surrey Hills”, and it wasn’t to be the last time the phrase ‘in the Surrey hills’ would be a feature of the day.

After leaving Chilworth the ‘A’ road continued to be pleasantly quiet as it continued to wind it still uphill way through Albury where I had to join the busy A25 for a short stretch. Fortunately this stretch on the A25 was only a mile or so and the it was still early so the road  wasn’t horribly busy, and within a few minutes I was upon the turn off for Shere and a nice quiet ride down in to the picturesque village itself. The checkpoint was easy to locate as it was right in the centre and next to an interesting looking cafe that seemed to be hub for a number of local cyclists, and as tempted as I was to stop the Full English was still weighing a bit heavy so I decided against it and decided to push on.

After leaving Shere the route then re-joined the A25 again for a couple of featureless miles before turning north a little on to White Down Lane, which was to be my first mistake of the day. The lane was very quiet, but I hadn’t payed quite enough attention to the profile of the route when planning it, as the gentle incline had suddenly suddenly become a ferocious hill indeed. About two thirds of the way up the hill I gave in to my screaming legs and got off the bike for a rest and walk. There were a number of road riders also riding up the hill practising for the ‘Ride London’ event the following week and many of those also got off and walked which certainly made me feel a bit better. Once I (and the other walkers) got to the top it was time to re-mount and ride a nice flat stretch along the edge of Ranmore Common before turning off on to the North Downs way and following it downhill all the way in to Westhumble and the foot of the dreaded Box Hill. 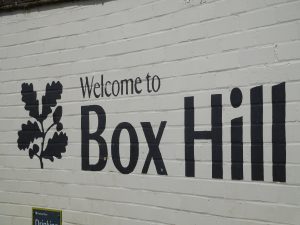 Box Hill has taken on cult status among cyclists, and is always a busty place, but on this gloriously sunny day it was far busier than I expected, so after negotiating the Subway under the A24 it was time to hit the hill. Once on the hill I made the decision to select a lowish gear and try to spin the pedals rather than pushing them and it seemed to be a tactic that worked for me. Whilst I’ll never win ant prizes (or Strava segments) for my time up Box Hill I made it without too much effort, and even managed to overtake a few riders along the way. This was actually easier than White Down Hill which I believe was because it was a long slow climb with a couple of switch back roads rather than a short savage climb.

So on arriving at the top and the National Trust buildings it was time for a rest, and although I was intending to eat lunch here I was still fairly full from the Full English so settled for an ice cream and cold drink with the literally hundreds of other riders all resting at the top. Consulting the BCQ question sheet and OS maps app I worked out that the checkpoint was on the road out passed the viewpoint which was along my planned route so after remounting it was only a few yards before I reached the checkpoint and noted the answer and took the photograph. Keen to get on and make it to the third checkpoint of the day it was back on the bike and on the road.

Most people think of the National Trust building as being all there is to Box Hill, and I was as guilty as anyone of this until I rode out from the observation point and through the actual village of Box Hill where it was a much welcome downhill cruise through Pebble Coombe, and on to the A25 again at Betchworth from where I rode a fairly uninteresting ride in to Reigate and then through the town of Redhill.

After leaving Redhill the Surrey Hills were once back in operation and it was a bit of an up and down sequence as I passed through Nutfield and Bletchingly before turning off on to the bizarrely named Rabies Heath Road and up yet another fairly steep hill before the inevitable downhill freewheel through some very quiet and narrow country lanes all the way in to Church Town where the checkpoint was easy to find. After a quick rest and the compulsory photograph it was time to get a move on as I needed to get back to Redhill and my train back home. From Church Town I rode north to join with the A25, where it was a bit of a quick sprint back in to Redhill station.

All in all this was a pretty tough day on the bike, with a lot more hills than originally anticipated, but the Snooty Fox breakfast set me up a treat, and the ride up Box Hill with its views from the top were definitely worth all the effort.