The Meriden checkpoint was one those had vexed me for a while – geographically it wasn’t very close to many other checkpoints that I had to visit (the other Warwickshire checkpoints were in a longer ride that I had planned) so made it difficult to include in with other rides, and the nearest checkpoints in neighbouring counties were also too far away to include it with those.

Then, out of the blue, the chance to visit just fell in my lap – I was required by work to go to Coventry on a two day course that would necessitate me staying overnight, and with it being early in June the evening would be light enough for me to take a bike and try to get out to Meriden.

On receiving my accommodation details from work things got even better – they had booked me in to a hotel that was only about four miles from Meriden, so if I took a bike that I could ride in street clothes then I could ride out to Meriden after day 1 of the course and stop at a local pub for my evening meal and then get back all before dark.

So, after checking in to my hotel after day 1 it was time to head off toward Meriden on my trusty Brompton, and after a short ride along the footpath along the A45 it was time to turn off and join some quieter roads, and head through Millisons Wood where I stopped briefly to take a picture of the memorial stone commemorating the location of the original Triumph Motorcycles factory for the majority of the 20th Century.

So, back on the bike and after what seemed like only a few turns of the pedal I was at the village green in Meriden, the location of the checkpoint at the centre of England, and also the site of the cyclists memorial.

My plan to find a pub for dinner took a last minute change when I noticed a fish and chip shop opposite the green – there’s nothing better than fish and chips out of the paper, sat in the early evening sun on the village green half way through a cycle ride.

Having filled my stomach it was time to mount my steed and head back to the hotel before dark. I opted to take a northerly turn from Meriden and loop round a couple of country lanes, through Eaves Green and back on to the road I came in on before hitting the A45 and back in to the hotel.

This was easily the shortest ride I’d done whilst questing but was no less enjoyable than any other – the sunny weather, fish and chip supper and a few miles on my underused Brompton all combined to make it a pleasurable couple of hours. 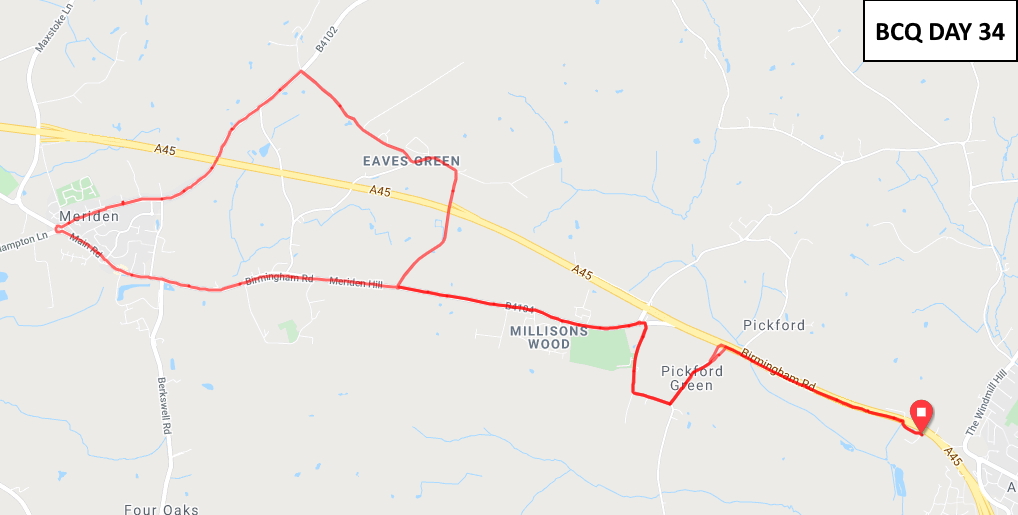