It’s quite late in the year for me to start questing, but I’ve now pretty much exhausted all my local checkpoints which means I have to travel further afield to start a ride, making opportunities harder to come by but a couple of days off work combined with a bit of good weather gave me a good excuse to get in a couple of checkpoints that have been in my mind for a while.

So, the plan was made, catch a train to Oxford, ride to the first checkpoint at Souldern, stop for lunch, ride back to Oxford to the second checkpoint of the day and then catch a train back home. Cycling, train journey and pub lunch, what’s not to like about a day like that?

As seems to be the case on many of my days that involve going by train, things went a little awry. After cycling from home to the local train station where I was to catch a train to Reading before changing to the Oxford train I find my train is running about seven minutes late – no problem I think, I have fifteen minutes change over so I should be able to make it. My train eventually arrived about eight minutes late, making me a bit nervous. Having arrived at Reading with about five minutes to spare I made a dash (with touring bike obviously) along the platform, up an escalator, along a bridge and down another escalator. Just as I set my first foot on the platform my train pulled away, I will admit to uttering a bit of an expletive at this point as I knew the next train that I could use without a booked bike spot was an hour wait.

Fortunately my annoyance was noticed by a member of the train staff and when I explained that I’d missed my connection by literally seconds when my first train was delayed he offered to help. There was a train due to leave for Oxford in a few minutes, and although bike booking was compulsory he explained to the staff on the train what had happened and upon checking the records they decided as no bikes were booked they would be happy for me to jump on. Hats off to the station and train staff!

From the train station in Oxford I had planned a route that got me out of the city centre as quickly as possible, and I was a little worried that some of the roads would be busy, and they were. However what I hadn’t allowed for was Oxford being a University city, and the place was awash with cyclists, the upshot being that car drivers were very considerate and courteous of their two wheeled counterparts.

From leaving the city the route uses the busy A4165, however there is a cycle path along its length until just past Oxford Parkway station. Once past the station it’s over the A34 and then through the villages of Gosford, and Hampton Poyle.

After arriving at Hampton Poyle the route turned very rural with lots of country lanes and relatively little motor traffic. Continuing in an almost straight line running North it was a pleasantly sunny ride through Bletchingdon, Kirtlington, and on towards Upper Heyford with barely a car to be seen. From Upper Heyford the route continued its northerly track for a few more miles before turning North Easterly to pass over the M40 and then quickly in to Souldern.

Finding the church that was the location for the checkpoint proved easy enough and after a few minutes taking some photos and filming a little for my YouTube channel it was time to find some lunch. A short ride in to the heart of the village had me coming across a nice little pub called ‘The Fox’ and after dining on the now mandatory pub lunch with real ale it was time to get back on the bike and head back to Oxford.

As is my preference, the route back to Oxford was different to the outbound route and shortly after leaving Souldern I took the left hand fork in the road toward Fritwell village before turning south again. The return road was pretty much parallel with the outbound route albeit around a mile or so to the east of the outbound route. This was far enough to take me through different villages (Fewcott, Middleton Stoney and Weston On The Green) before returning to Bletchingdon and the same route back in to Oxford city centre. Once in the centre finding the checkpoint at Rhodes House on Park Street South was again trouble free and with plenty of time until my return train it was to go off and explore a bit of the city.

All in all and after a slightly stressful start to the day everything panned out well and another good day was had on the British Cycle Quest. 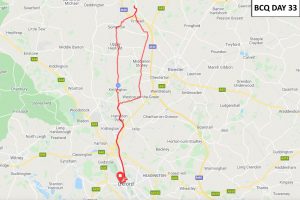